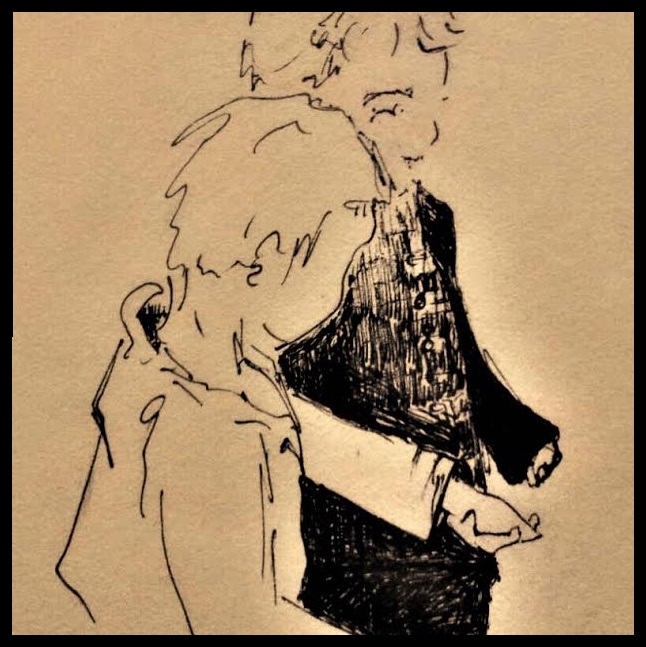 Jasmine Soukieh is a Canberra-born and raised Lebanese-Australian, currently spending her days between New Zealand, Lebanon and Australia while she pursues a doctorate in nutritional sciences.  Jasmine is one of the Founding Co-editors of be:longing.

Firas concentrated as he tried to fortify his bread’s boat-like structure with his fingers before sending it into the yoghurt-y deep before him.  He was seldom successful at crafting a fitting vessel for such a journey, but he would persist.  He watched as the bread lost all of its integrity upon making contact with the labneh.  It splayed out helplessly atop the white mound, lamenting a tear in its middle.  Expedition failed.  Firas gathered up what he could with his inferior scoop, gave it a superficial dip in the green-yellow pool of olive oil at the bowl’s centre, and brought it to his mouth.

He would try again.

He would try again tomorrow.

He slid off his tall seat beside the bench where he’d been taking his time with breakfast and wiped his hands on his shirt to rid them of the crumbs and smudges they’d accrued as he ate.  His mother caught him.

He chose not to take notice of the warnings his mother gave about these stains; he liked to hear her scold him in this way – affectionately.  If it was still “حبيبي “ (“my darling”), then he was in the clear.  Soon she would swoop in close to inspect whether that dreaded olive oil stain had started to take hold in his shirt’s accommodating fabric, and he would have her face near his.

Her mind was grappling with the burdensome possibility of a stain.  She couldn’t remember whether they’d brought along the oil soap her mother had set aside for them before they’d left.  It seemed reckless now not to have made it a priority during the pack.  How did one remove such a stain without that soap?  She was relieved to find that no stain had formed.  She gave Firas a wry wink and kissed his cheek.

She handed him his schoolbag and motioned with her head in the direction of the open front door.  They hurried out of the house.  Firas stood right by his mother as she locked the front door.  He had taken to hovering at her side since they’d moved away from Teita and Jiddou.  He didn’t know where he might disappear to if he stepped too far away from her in this new place.  They had been here a month, and he still had no idea which streets led where.

There didn’t seem to be many people around, either.  He didn’t see them walking around and he didn’t hear them from inside their houses.  Where were all the people?  He wondered this often.  He would wait a little longer for them to show themselves.

Each house sat all alone on these streets.  He didn’t know what to make of it.  There was a lot of space, which he liked.  But he didn’t know if he was allowed to be in it.  He would’ve liked it if Nuh were here with him.  Nuh might’ve been able to answer these questions.

He watched the cars keep neatly to their marked-out lanes as they drove, and he listened.  It was still quiet.  It made him lonely.  Even his mama and baba seemed further from him here.  They spoke to each other through their eyes now.

And he watched on from afar.

As his school came into view, dread took hold of him.  He began a panicked search through his brain, groping around desperately for English words that could help him throughout the day.  He could never remember to practise them.  He didn’t really need to hold on to them, anyway – just a few hours, and everything would go back to normal.

A quick exchange passed between his parents before his mother slipped out of the car to walk him to the school gate.

He flung an arm around the headrest of the passenger-side seat, choking it clumsily in an attempt to propel himself out of the car, schoolbag strapped tightly and cumbersomely to his back.  His father patted a firm hand to his and let the full force of his effusive warmth pour over his son.

Firas was overjoyed – his baba was back with him again.  He hoped that his baba’s inevitable retreat into his mind would be put off a bit longer today.

His father hoped that, too.  He’d caught himself slipping away into his mind more and more often since they’d committed to coming here.  He seemed to have become two people since their move, but feared it had been achieved through a halving, and not an addition.  He hoped it would just take their settling in to return him to his old self.  Sometimes he worried that he’d unwittingly traded in that old self; an implicit condition of entering the new country.

He shared a forlorn smile with his wife as she made her way back to the car.

He set the gears to reverse and looked on her face.  Her mind was off with Firas.

It was an evasion, but he didn’t need to hear the words to understand.

Firas realised for the first time that he could see into the carpark through the classroom’s windows.  He watched as the car pulled away, disappearing along with his parents.  His heart seemed to slip out of its assigned cavity and drop onto the organs below.

He would’ve liked to be left alone to cry, but then, he wouldn’t like to cry here.

Class began and he listened carefully for his name during rollcall.  He’d missed it a few times before.

That was it.  The emphasis had shifted on the syllables, among other things, but that was it.  He raised his hand.  His teacher never seemed satisfied with her pronunciation of his name.  She contended with herself in a questioning monologue whenever it came time to say it aloud.  He wondered why she never put the question to him; this was one of the few answers he felt confident he could give.

During the morning play activity, he was happily surprised to recognise a few words in the instructions his teacher spoke.  He wasn’t sure if this was a paired activity or if he was to fly solo, but he would figure it out in a moment.

He felt someone take his hand.

Suddenly, he was back in the school of his hometown, hand in hand with Nuh.  Nuh would take his hand like this often, comfortably and without a word.  He missed Nuh.

Firas looked around to see Isao.  Isao kept his hand rested in Firas’s as the last of the instructions was related to them.  Firas felt his heart prop itself up, lightening its weight off those burdened organs beneath.

He let himself be pulled gently into place in front of Isao to form the double-ringed circle the activity necessitated.  He hesitated as each instruction was updated, always a step or two behind his classmates.  Isao tried to anticipate Firas’s confusion and to guide him into place in time with the others.  He didn’t want him to be left out.

When she came to visit, he sometimes got the impression that she was encased in a gilding all her own.  He got that same impression with Firas.  Perhaps it was painted on them before they left their homes.  A parting gift.  A thin layer of protection.

Firas felt encased, too.  Sometimes it was reassuring, and sometimes it suffocated him.

He had started to move along with the rest of the class now.  Isao noticed.

When the activity ended, Firas watched after Isao as he wandered off to his desk.  He hoped to return that kindness.  Isao sat down at his desk and searched the room for Firas.  He hoped he had just made a friend.

The end of the day came a little quicker than usual, and Firas felt satisfied with it.  He bounded up to his mama when she arrived; she’d come right to the classroom door to collect him.

As he stepped through the school gate, he heard Isao call out to him.

Firas turned around, looking for Isao’s face.  He waved to him and smiled, a bit unsure.  He shrugged happily at his mama’s questioning grin.