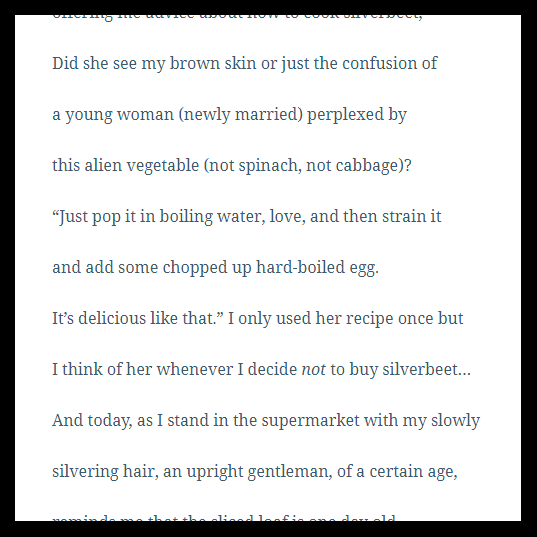 Anita Patel was born in Singapore and lives in Canberra, Australia.  She is as Australian as a banana paddle pop and a pair of sandy thongs and she is also a part of the Asian diaspora.  She has been published in various journals including Burley Issue One, Block 9, Conversations (Pandanus Press ANU) and Cha: An Asian Literary Journal.  Her work has also appeared in the Canberra Times and in an anthology titled Pardon My Garden by Harper Collins.

Some years ago, Australian Prime Minister Paul Keating referred to the “myth of monoculture”.  I love these words and have been reminded of them in so many of my daily interactions.

My short prose poem, The Kindness of Strangers, is in response to this powerful and truthful phrase.  In it, I reflect on two seemingly insignificant interactions from my own life:

One was back in the early 1980s when I was newly married and encountered an elderly Anglo-Australian woman in Woolworths.  She did not see me as culturally different – she simply saw an inexperienced young person floundering in the vegetable section, in need of wise culinary advice from an older matriarch.  I dutifully followed her recipe for silverbeet, but knew even as I was cooking it that it was a far cry from the sizzle, spice and flavour of the vegetable dishes cooked in my family home.  Yet, I was grateful to her for taking the time to help me and for reminding me that the impulse for women to bond in random conversation transcends generations and cultures.

The second was a more recent interaction with a gentleman in the bread section of Coles.  He was concerned that I had mistakenly picked up a loaf that was a day old.  He told me all about the bread factory in Fyshwick closing and we had a chat about the way in which major supermarkets cheat their customers.  Again, I realised that this was an absolutely natural exchange between two human beings – unmindful of each other’s culture or colour.

While there are times when many of us in minority groups can feel despondent and excluded, we must never forget that most people see past the veneer of race and just want to engage with their fellow human beings.  We witness relationships, connections, laughter and chatter between people of different cultures all the time in this country.  They remind us that monoculture is a myth and that what unites us as human beings is far more profound than what divides us.

We have all known the kindness of strangers.

The Kindness of Strangers

I have always known the kindness of strangers…

That silver haired old lady, in Woollies, over thirty years ago,

offering me advice about how to cook silverbeet,

Did she see my brown skin or just the confusion of

this alien vegetable (not spinach, not cabbage)?

“Just pop it in boiling water, love, and then strain it

and add some chopped up hard-boiled egg.

It’s delicious like that.” I only used her recipe once but

I think of her whenever I decide not to buy silverbeet…

And today, as I stand in the supermarket with my slowly

silvering hair, an upright gentleman, of a certain age,

reminds me that the sliced loaf is one day old –

I remove it from my basket with a sigh –

“Can’t make a decent sandwich out of that…”

We chat about the good old days, of fresh bread

and honest shopkeepers, and I think about