Sanjaya Fernando was born to a Sinhalese, rural family in Sri Lanka.  He is currently an academic at Rajarata University in Sri Lanka and moved to New Zealand three years ago to undertake his PhD research in Agribusiness.  There, he explores solutions to challenges encountered by small-holder farmers in Sri Lanka.

Sinhala and Tamil New Year (Aluth Avurudda) is celebrated by Sri Lankan Buddhists and Hindus around the world in the month of April (known as Bak according to the Sinhalese calendar).  It hopes for peace, happiness, prosperity and a renewed beginning for everyone.  It is generally celebrated on the 13th or 14th of April and begins with the sighting of the new moon.  The dawn of the New Year is based on the sun’s astrological movement from the Meena Rashiya (House of Pisces) to the Mesha Rashiya (House of Aries), indicating the end of the harvesting season.  The New Year celebrations include games, family gatherings, family meals, visiting friends and relatives, and religious observances and rituals.

Sri Lankans living in New Zealand also celebrate the New Year to varying degrees.  Perhaps it is a wish to feel closer to our culture, people and traditions through the New Year celebrations.  To enjoy the sense of community this celebration creates.  In the last three years, I also joined the Sri Lankan community in my city in New Zealand to celebrate the New Year.  Together, we felt a sense of belonging and happiness that helped us overcome the nostalgia arising from the separation from our families in Sri Lanka, to some extent.

Nevertheless, I felt an acute incompleteness; a lack of authenticity and sense of true happiness.  I thought this was probably the result of a contextual detachment while experiencing the New Year.  The usual signs I associate with New Year were absent.   Although I can recall many, I would like to reflect on this using three distinct natural phenomena that appear along with the New Year in Sri Lanka.  First, is a bird’s song.  The second and third, respectively, are the flowering and fruiting of two plants.  They are nature’s harbingers of the New Year, which do not appear the same in a different geographical and natural environment.

Koha (Asian Koel – Eudynamys scolopaceus) is the first of nature’s sign that tells me that New Year is approaching.  Koha is found in the Indian sub-continent, China and Southeast Asia, including in Sri Lanka.  It is a brood parasite and lays its eggs in the nests of different hosts.  Koha’s male bird is distinguishable from its female and it is glossy bluish-black in colour.  The female bird is dark brown with white and buff spots.  Koha’s breeding season coincides with the New Year period in Sri Lanka. 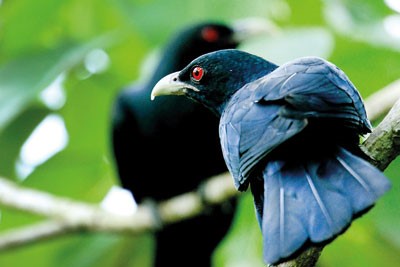 The distinct mating song of Koha’s male bird can be heard frequently at the beginning of April.  The male bird’s repeated ‘Koo-Ooo’ song echoes from all surroundings as the New Year approaches.  Its beautiful song reminds me of the dawning New Year and breeds in me joyful feelings.  Koha’s song is also heard in New Zealand’s neighbouring Australia, but it is a different species that sings from September to October.

The second natural sign that appears with the advent of the New Year is the flowering of the Erabadu plant.  Erabadu is usually grown as a hedge or shade plant in Sri Lanka.  Its new buds and leaves are also eaten as a vegetable.  Its blossom is very attractive with lots of brightly-coloured red flowers.  Flowers of this plant surrounding villages in hedges make the New Year time very colourful; like natural flags hoisted off the ground along hedges to welcome and announce the New Year.

The third sign nature shows to mark the New Year’s arrival is the fruiting of cashews with the New Year.  Because of this, it is common and precious to have a cashew nut curry dish made of young green cashew nuts at the New Year table.  The ripened cashew apple is a delicious fruit.  Hanging cashew apples on trees are like red and yellow glowing bulbs; another of nature’s New Year decorations to welcome the New Year.

Preparation of fresh cashew nut curry is a bit of a time-consuming process: we pick fresh, green nuts from trees in the home garden; each and every single nut is cut into halves to reach the flesh.  It is very fresh and creamy when cooked, and I have never tasted the same from supermarket-bought cashew.

These are unique natural phenomena and nature’s symbols of the approaching New Year.  Outside of the context to which these belong, the New Year seems different.  To me, they reflect nature’s readiness to welcome the New Year and they signal to me that it is time to prepare for it.  The New Year felt incomplete without them…

There will be birds’ songs, but never Koha’s song

There will be flowers, but not Erabadu

There will be cashew, but without its apple

There will be many new years, but none will deeply touch my heart