Jasmine Soukieh is a Canberra-born and raised Lebanese-Australian, currently spending her days between New Zealand, Lebanon and Australia while she pursues a doctorate in nutritional sciences.  She is one of the Founding Co-editors of be:longing. 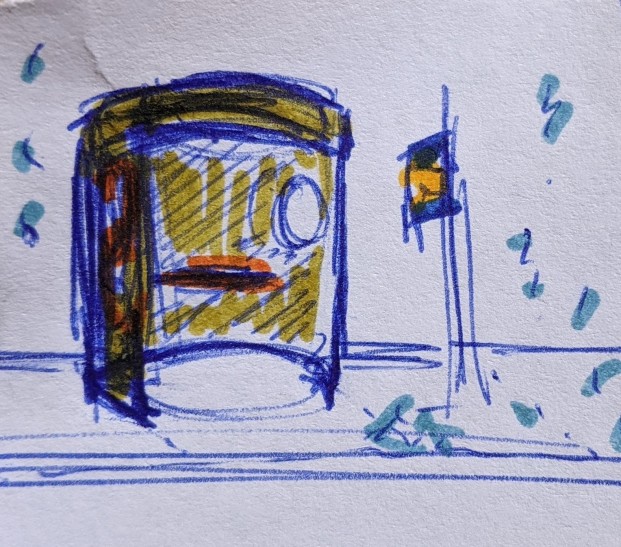 The receptionist at the doctor’s surgery leaned forwards behind her work-station, “Sorry, what was that?”

Wafaa braced herself; she would have to repeat it.  She was sure she’d been clear.  Her enunciation was just right.  Volume, too.  Just not the accent.  Or was it the features?

Wafaa reviewed her sentence quickly in her head and readied her mouth to shape it for this struggling woman.  The one looking at her severely with eyes narrowed.  The one with a crease ever-deepening in the space between her eyes.  The one focusing all her attention on comprehending the slightly-elaborated sounds emerging from Wafaa’s mouth.  Wafaa looked at her name-tag – Alison.  Alright, Alison, she thought, Here it comes.

Alison felt a mild panic set in.  She hadn’t grasped a single word Wafaa had said initially.  She had registered the headscarf.  And that an accent had rendered the English words she usually understood without effort unfamiliar.  It wasn’t about the headscarf!

She hoped desperately that she would catch the salient elements of what was about to reach her ears on this next try.  She would be mortified to ask again.  Okay, she thought, Lay it on me.  Was it about the headscarf?

Alison got it this time – Medicare rebate.  She had her key words, and she could absolutely run with them.  She smiled with relief, and a little pride, and pulled out a sheet of paper that would help guide her oncoming explanation.  It was auto-pilot time.  She started in on a speech that had become optimised by sheer repetition for absolute economy of expression and a maximum of semantic transfer.  She would just set the speaking speed to something a bit slower, she decided.

Wafaa sighed internally.  The comprehension difficulty was not mutual.  She scanned the paper quickly for the relevant bits, and listened politely to the rest of the words happening to her.  She regretted asking her question.  Could she not just have looked it up online and spared herself this, or just forgotten about it altogether?

When Alison was done, Wafaa smiled with just her mouth and nodded as she handed over her bank card.  She was usually quite talkative, and she did still have questions, but she didn’t want to venture more talk lest it lead to a longer interaction under the prevailing conditions.  Online, she remembered, You’ll find it online.

The transaction ended according to a standard script from which neither Wafaa nor Alison dared deviate.  They silently thanked service industry convention for this intuitive and somewhat-universal script that would save them both from the burden of a more personalised conclusion.

“Thanks,” Wafaa said, tucking the card back into her wallet.

Alison waved her off, “My pleasure.”

Wafaa wandered out of the surgery and over to the bus stop nearby.  It started to rain.

She shuffled into the bus shelter and sat beside a woman already there.  The woman had her chin propped up on both her hands; head and palms all balanced on top of her walking stick.  She sat the same way an aunt of Wafaa’s sat.  Wafaa smiled.  The woman smiled back; she was glad for another person’s company right then.  “Will be nice if the bus comes late today,” she joked, tipping her head towards the rain hammering down outside.  Wafaa laughed, “I hope so, too.”

The woman ventured a few words in Farsi.  Wafaa shook her head apologetically, “Sorry – Farsi?”  She asked.  She tapped a hand to her chest, “Arabic.”

“Aha,” the woman smiled.  They sat in silence for a few moments.  “Afsar,” the woman said, tapping a hand to her own chest.  She could say it as it was.  Wafaa grinned, “Wafaa.”  She couldn’t remember the last time she had said her name so comfortably.

Wafaa noticed a paper clutched in Afsar’s hand.  The colour scheme and page organisation were familiar to her; she’d folded one like it into her own bag as she’d left her doctor’s office.  Afsar raised her hand, “Script.”

Afsar smiled, but she was bursting with worries.

“Always medication,” she started, wondering what the right amount was to reveal to this stranger.

“He always tells me – ‘Take this… take this…’” Her voice was quiet and non-committal.  Wafaa turned on the bench to face her.

“I ask him – ‘What is it?’  He doesn’t explain,” she said, waving the paper with frustration.

“The time in there goes by very quickly,” Wafaa offered.  Afsar could not have agreed more, “Always, it is very fast.  I forget everything like that.”  She had wanted to say this to someone many times, but it had felt like the admission would lead her where she wasn’t prepared to go.  Often, she had made light of it instead.  In the shelter now, though, insulated by the sound of heavy rain outside, she felt safe – and tired enough – to say it, “I am upset.”

Wafaa opened her mouth to venture reassurance, but closed it again soon after.  Afsar, perhaps, just needed to talk.

She had been completely railroaded in the doctor’s office again.  She had prepared herself in the days before it.  She had told herself, ‘I will say everything.  Why can’t I?’  But the same thing happened as happened every time.  Her doctor had hurried her along.  He had not listened.  Again, he had finished the sentences she started, impatient with her phrasings – and he had got it all wrong.  Again, when she had ventured guesses at her ailments’ origins, he had looked at her like her rationales were outlandish.  And he had become annoyed when she had tried to speak over him to clarify and reassert herself.

Wafaa recognised this situation.  How hard it had been to get medical professionals to listen to her when she had first arrived.  Even now, it took a certain stern repetition to be heard with something approaching genuine consideration.  It often wasn’t worth the effort.

She didn’t know how to comfort Afsar.  “It was like this for me, too,” she said quietly.

She had fallen to online engagement with The System.  Perhaps it was an assumption, but she didn’t imagine this recommendation would be of much use to Afsar.  It wasn’t a great fit for her either, in truth.

“They think we are stupid,” Afsar said finally.  There.  She had said it.  The thing she had known for so long, but from which she had always averted her mind; it was humiliating.  She had wanted it to be untrue.  But there was no use in pretending.  It was always there.

Wafaa was now lost in her own head.  She had found out the same thing.

Afsar looked at her watch.  Her bus was due to arrive.  She stood up slowly and walked to the entrance of the shelter.  She hated the paper in her hand.  She hated that she couldn’t just toss it away.  She might prefer illness to this unfair dependency; the thought had crossed her mind a few times.  It wasn’t like her.  She felt sadder.

Wafaa was rifling through her mind, searching for some bit of advice to hold out to Afsar.  She spoke next loudly and with unexpected conviction, “You can change your doctor.”  Maybe this would be of use to Afsar.  “I changed my doctor many times,” she continued.

Afsar looked at Wafaa carefully.  She went to say something, but thought better of it.

Wafaa anticipated her thought, “Don’t worry about upsetting them,” she said gently.  Afsar was relieved to be understood.

“You did this?” She asked.  “I did,” Wafaa said firmly.  Afsar shifted her walking stick from one hand to the other and waved her bus down absently.  She considered the possibility.  It hadn’t occurred to her.  It would be very uncomfortable to do.  “Okay,” she said; it was tentative.  Wafaa persisted, “It might take a long time, but look until you find one who listens.”

The bus pulled into the stop.  Afsar was still holding the prescription; she pushed it into her handbag, a little less burdened by it.

Wafaa felt that warmth spread through her again; she wished she could return the farewell with some apt Farsi phrase.

Afsar nodded once and disappeared onto the bus.  Wafaa watched it leave.

Her own bus would be another several minutes.

Wafaa stared at a puddle outside the shelter; rain was dancing on its face.  She swallowed guiltily.

Maybe it would work for Afsar.